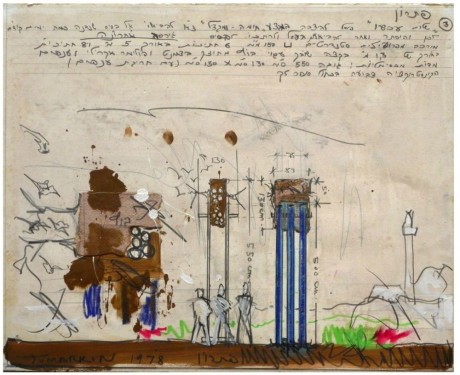 Yigal Tumarkin was a highly regarded Israeli sculptor, painter and scenicdesigner.
Born in 1933 in Dresden, Germany
Died in 2021 in Tel-Aviv, Israel

Tumarkin created small scale works alongside statues and monuments erected throughout Israel. Underlying Tumarkin's works is an idea of duality. Although his work has undergone many stylistic changes over the years, it is characterized by the desire to create a language that unites the contrasts.

Tumarkin has exhibited dozens of solo exhibitions in Israel and abroad. His works are included in major museums and collections in Israel and around the world. Among others, he exhibited solo exhibitions at the Tel Aviv Museum of Art, the Helena Rubinstein Pavilion, Tel Aviv-Yafo (1962. 1974), the New Museum of Art, Haifa (1962) and the Israel Museum, Jerusalem (1967).

Yigal Tumarkin received many awards in recognition of his work, and in 2004 he received the Israel Prize.